I’ve finally finished the edits for my next Loki novel, The Trickster’s Song!

Of course, I still need to take those edits off the paper and put them on the computer, then tie up a million other loose ends (like numbering my chapters), but we’re on track for a September release of my third full-length novel.

Let’s celebrate, shall we?

How about checking in on Loki and Caroline for a minute? Right now they happen to be standing on a windswept cliff overlooking the Atlantic Ocean…

“You know, this place is a bit of a geological marvel,” Loki said. “By all rights, it should have crashed into the Atlantic hundreds of years ago.”

He gave me a little half-smile, the kind of expression he wore when he’d done something especially sneaky with his magic. Like when he turned our linen closet into the entrance to an enormous, subterranean hot springs lined with thousands of candles.

“I assume the phenomenon has been thoroughly researched?” I asked, playing into his game.

Loki shrugged. “There have been a few research expeditions. Oddly enough, they seem to run into terrible luck with their instruments.”

That smile returned, a bit stronger this time. I let my gaze wander from his face to the two burial mounds, lying side by side, separated by perhaps a thousand years. I didn’t ask if anyone had ever suggested an archaeological expedition. Even from here, I could feel the faint thrumming hum of Loki’s magic protecting this place. I could probably only see the mounds because he wanted me to see them.

The sting of tears welled behind my eyelids. Watching the green grass and the nodding blue heads of the flowers bob in the wind somehow made Loki’s story horribly, painfully real. Perhaps Loki felt the same, because his smile vanished as he turned to the ocean. He pressed his hand to his chest and reached into the folds of his armor.

A moment later, Loki held his arm out to me. He didn’t exactly meet my eyes; his gaze remained on the distant ocean. I wrapped my hand around his cold fingers, and he pressed something into my palm.

I brought my hand to my chest and unfurled my fingers slowly. It was a metal leaf. An iron leaf so old it had developed a gentle teal patina over its delicate veins and ridges. My vision blurred with tears as I ran my finger along the thin edges. It felt impossibly ancient.

“Do you…” I asked, but my voice faltered. “Do you always carry this around with you?”

Loki nodded, and the edges of his lips twitched up. “It’s part of my armor, now. Along with—”

He reached into the folds hear his heart a second time, then held his hand out to me again, his fingers clenched into a fist. I extended my arm, and he opened his hand, pressing something soft into my hand. I frowned. It was a rumpled bunch of bright red fabric. A gust of wind made me hunch my shoulders against the cold before I shook out the cloth.

I stared with utter disbelief at the faded red underwear pinched between my fingers and fluttering happily in the wind. It wasn’t particularly sexy. It looked like plain, cotton undies. Hanes plain cotton undies, the kind that came in a plastic-wrapped pack of six at Wal-Mart. In fact, it looked just like something I would wear. Or something I would have worn, back in Chicago, when I was broke and single.

Loki pulled the underwear from my hand and tucked in back into some secret pocket on his chest. “It was,” he said.

“You carry my underwear in your armor? What the fuck?”

His eyes darkened. “I took it from you when the clouds of Ragnarök began to gather. I wanted to die on Vígríðr holding something of yours.”

“Oh.” I blinked fast, trying to clear my eyes. I wasn’t sure if that made the whole thing more or less creepy. “Damn. What else do you carry around in there?”

The hint of a smile pulled at the corners of his lips. “Just this.”

He didn’t bother trying to hide the square of pale fabric he pulled from the folds of his armor. It fluttered open in the breeze, giving me a glimpse of pale pink and soft green as I took it from his outstretched hand. The fabric felt strangely light and insubstantial, as if it were woven of cobwebs. I smoothed it over my palm, although creases remained to show where it had been folded into a tight square.

The fabric was covered with tiny stitches, the kind of careful, even work I associated with machines. But there was something organic about this shape, something delicate and even loving which made me think it was handmade. I turned the fabric over in my hands, examining the image from all angles.

It was a flower. Five overlapping pink petals unfurled around a blazing yellow core. The threads were so fine I felt I could almost see the pollen-laden stamens bending against the petals. Green leaves twined protectively around the pink blossom.

I touched the stitching very gently with my fingertips. This had to be a wild rose, the kind which grew in thick tangles all over the dunes from San Diego to Seattle. It struck me as odd to make such a careful, beautiful representation of such an ordinary flower.

My gaze wandered from the embroidered flower in my hands to the burial mounds standing between me and the churning ocean. Loki had been married before. All the myths and legends mention his wife, Sigyn, the incantation-fetter. Sigyn the faithful. The beautiful woman who had been bound with Loki beneath the earth, when the other Æsir imprisoned him for Baldr’s death.

“Sigyn?” I asked. My voice trembled, although I tried to pretend that was only the wind.

“Yes. Sigyn.” His lips curved into a gentle, secret smile that made me feel like I’d swallowed broken glass. 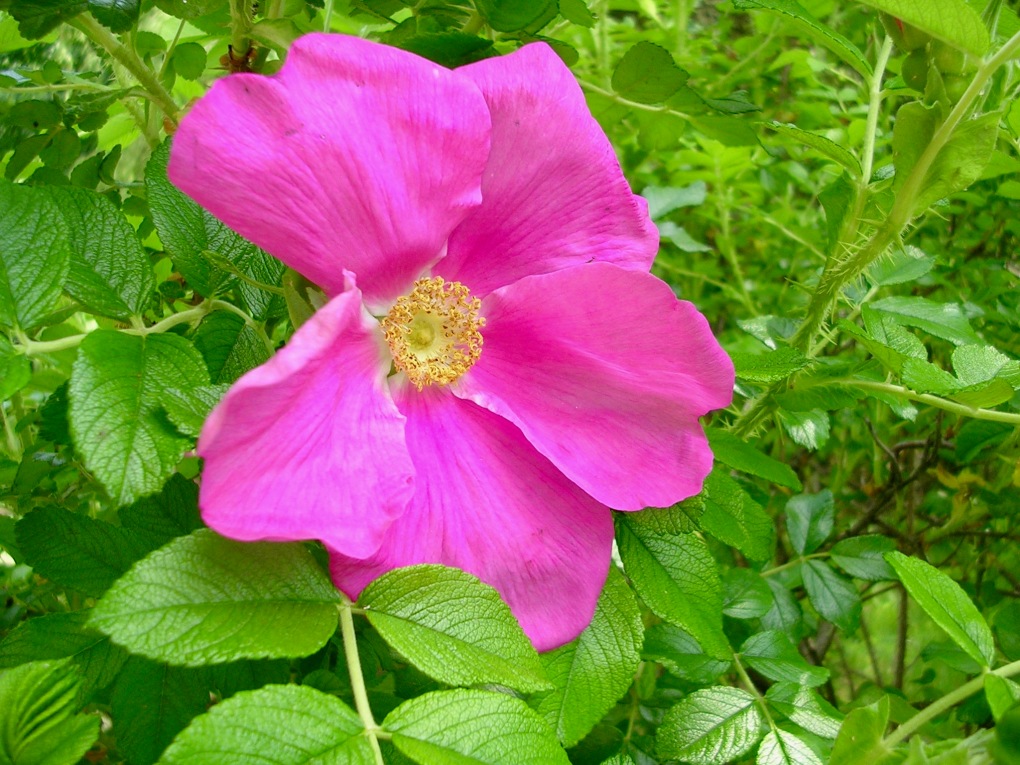 Click here to request an Advance Review Copy of The Trickster’s Song, for FREE, in exchange for posting your honest review of the story during release week.

Wondering who the heck Caroline is and how Loki ended up carrying her underwear to Ragnarök?

Click here to check out the first book in The Loki Series, The Trickster’s Lover. (Use the code LOKI to take 25% off.)

Like what you’ve read? Join my newsletter and I’ll send you a free copy of Tam Lin, my sexy modern take on the Scottish folktale.