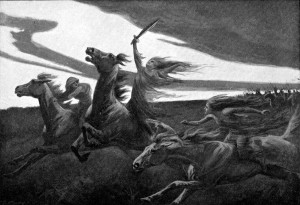 I write sexy romance novels inspired by Norse mythology (which you can check out here). I also have a Master’s degree in Religious Studies from the University of Chicago, where I spent a fair amount of time studying Norse mythology.

There’s a dark side to Norse myth I’ve shied away from discussing.

But now – especially as I’ve just finished three months of teaching English reading and writing to a group of immigrants and refugees from Africa, the Middle East, and Eastern Europe – I want to drag this out into the sunshine and be done with it.

Fascists – both past regimens and modern groups – have occasionally found it useful to appropriate Norse mythology. This was somewhat true for the Nazis, and it’s even more true today, with some modern white supremacist groups claiming to follow a religion derived from Norse mythology.

So let me be perfectly clear here:

There is no basis for white supremacy in Norse mythology.

My friend, I’d love to tell you…

Odin is one of the Æsir, or the gods of Asgard. And he lives with other Æsir in Valhalla, right?

Well, yes and no.

According to the prose Edda, Loki “is counted among the Æsir,” even though he’s actually a frost giant, or a Jotun.

Because (in the poetic Edda) he swore an oath of blood-brotherhood with Odin.

Yes, Odin made friends with a frost giant, and then invited him to come live with the gods.

And Asgard is even more diverse than just allowing one token Jotun in their midst.

Yes, instead of annihilating each other, the Norse gods learned to live in peace with their former enemies.

In fact, making peace with your enemies is a reoccurring theme in Norse mythology…

Racial purity is not a thing in Norse mythology.

In fact, one of the Norse gods’ favorite ways to subdue their enemies (especially the Jotun) is to marry them.

When the giantess Skadi comes to Asgard seeking vengeance for the death of her father Thjazi, do the Æsir give her a big, manly duel?

They offer her a husband, they make her laugh, and they put her father’s eyes in the sky as a constellation.

And when the god Freyr sits on Odin’s magical throne and spies a beautiful woman… who turns out to be a giantess… do the Æsir tell him to forget about her because he can’t marry outside his race?

He marries the beautiful woman, even if it costs him his magical sword.

Yes, marriage in Norse mythology can be one god, and one frost giant.

3. Odin is More than a Warrior

Modern white supremacists make Odin out to be some supreme warrior, fighting his way through any and all challenges. And yes, Odin can fight – he’s got a spear for a reason. But Odin is just as likely to trick, sneak, or sleep his way to what he wants.

When Odin wants the mead of poetic inspiration, does he rush in on his eight-legged horse Slepinir and kill the giants who have the mead?

He drills a hole in the side of the mountain where the giants keep the mead, turns himself into a snake, slithers in, and then spends three days and three nights screwing the giant’s daughter in exchange for the mead.

Odin is a lover, people. A seducer.

In the myths, Odin has much more in common with a magician than a blood-drenched white supremacist battle-god.

There’s a reason Odin was the inspiration for Gandalf.

This is a really excellent story from the prose Edda.

One day, Thor woke up to find his hammer Mjolinar was missing. When Loki finds Mjolinar with the giant Thrym, is there a huge, epic battle?

They make a deal. If the Æsir agree to bring the beautiful Freya to Thrym as his wife, he promises to return Thor’s hammer. Freya is less than thrilled with this idea, so Heimdall suggests Thor dresses as Freya and sneaks into Thrym’s castle to reclaim his hammer.

Okay, so this only happened once, and Thor only dressed like a woman to get what he wanted.

But this story still says something about Norse mythology, and their definition of manhood.

Namely, it says dressing as a woman doesn’t make you less of a man. Norse masculinity was not so fragile that it could be damaged or destroyed by a bunch of clothes.

As you can see from just a basic, cursory reading of the only two surviving texts that contain stories about the Norse gods (that’s the prose Edda and the poetic Edda), there is no basis for white supremacy in these myths.

White supremacy is, at its core, the belief that some people are better than others. Not because they are smarter, or stronger, or better educated, or born in a certain part of the world. Just because they have white skin.

And there’s nothing like this in the myths. NOTHING.

In the Eddas, the Norse gods are frequently backed into a corner by their enemies. They’re tricked, they trick their enemies, they make peace treaties, and they co-exist happily with other races. Some gods are strong, some are clever, and some are brave, but these traits are expressed in their actions; they are not a random accident of birth.

In fact, the only possible way to make the Norse myths into a justification for white supremacy is to completely disregard what the myths say about Odin and his world.

That’s like taking a religion based on a man who told his followers to abandon their possessions and love their enemies, and using it to elect a racist, billionaire president.

Like what you’ve read? Join my newsletter and I’ll send you a free copy of Tam Lin, my sexy modern take on the Scottish folktale.