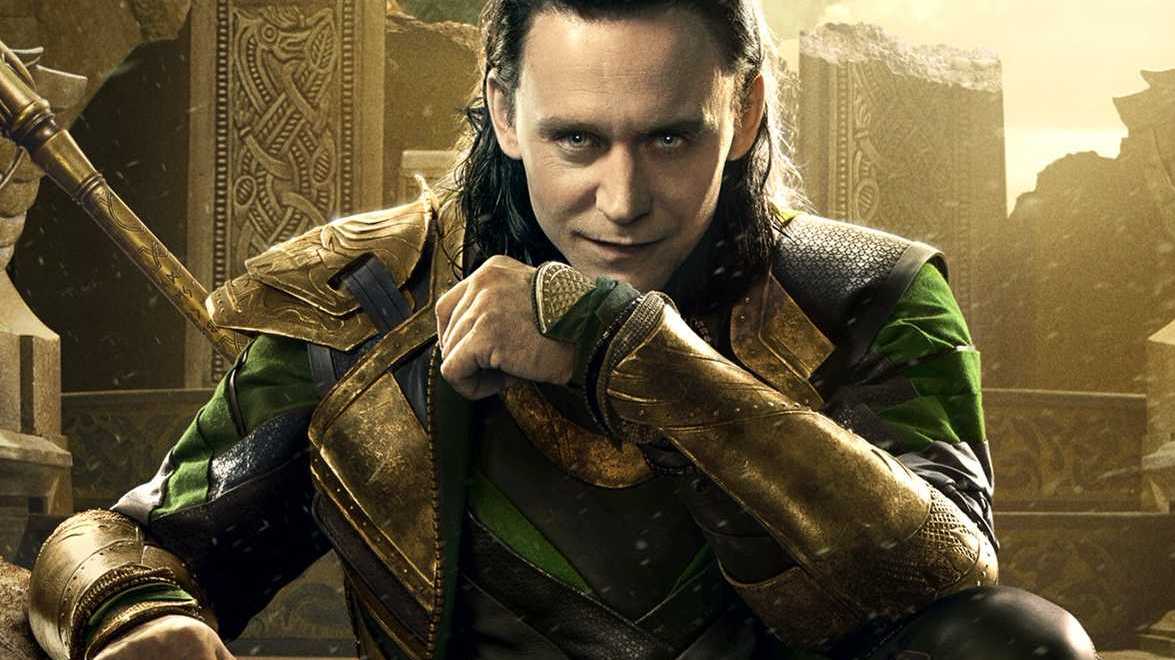 Click here to check out my urban fantasy novel with the Norse god Loki!

Thor, Odin, Loki – everyone knows the Marvel Universe didn’t come up with these guys. The gods of Asgard, and the Nine Realms, came from Norse mythology.

And hey, things in the comic book world can get pretty weird – adopted frost giants, battles over the throne, Dark Magic, the Tesseract.

But what you might not know is that the Norse myths are pretty damn weird themselves. Check it out.

1.I’m Not Your Brother

Loki is the son of the giantess Laufey, but he’s also considered one of the Ӕsir, the gods of Asgard. So is he… adopted?

In the myths, Loki is not Thor’s brother. He’s not even Thor’s adopted brother (with apologies to one of the greatest lines in Avengers).

According to one fragment of one of the few surviving texts, the Lokasenna, Loki is an Ӕsir because he swore an oath of blood-brothership to Odin. Making Loki Thor’s… step-uncle?

Loki’s inclusion among the Ӕsir leads some scholars to speculate he’s actually an older, elemental god, perhaps the god of fire.

2. No Shot at the Throne

The Norse myths don’t name a successor for Odin’s throne because, hey, everyone knows exactly how they’re going to die. And they all die together.

So, Odin rules Asgard until Ragnarök.

After Ragnarök, the Nine Realms are destroyed and the gods are dead – there’s no one left to rule.

In the comics, Mjolnir was forged in the heart of a dying star. Not a bad origin story.

In the myths, Loki tricked the dwarves Brokk and Eitri into making Mjolnir for the Ӕsir.

He made a bet.

If the dwarves could create something more amazing than Skidbladnir, a ship that can be folded up like a cloth and carried in your pocket, and Gungnir, Odin’s spear, Loki promised them… his head.

When the dwarves Brokk and Eitri presented Mjolnir, the Ӕsir said, “Sorry, Loki. You lose.” But Loki tricked the dwarves by pointing out they couldn’t cut off his head without harming his neck… and his neck wasn’t part of the deal. (There’s a logical fallacy called Loki’s Wager, after this story.)

So the dwarves sewed his lips shut instead.

Side note: Dwarves are A-holes.

Loki has two children with his wife Sigyn: Vali and Nari.

With the giantess Angrboda he had three children: Fenriswolf, who is fated to kill Odin and then devour the sun during Ragnarök; the Midgard serpent, who kills Thor during Ragnarök, and his daughter Hel, who rules the realm of those who die dishonorably (for the Norse, that’s anyone who doesn’t fall in battle).

And he’s the proud mother of Sleipnir, Odin’s eight-legged horse. 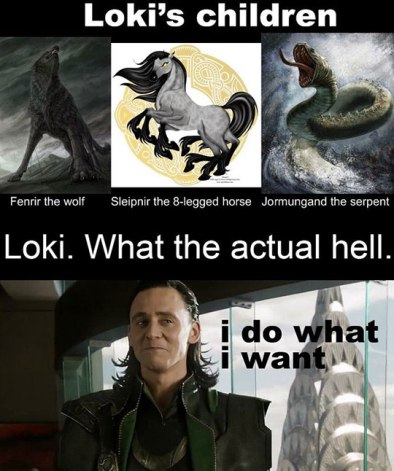 At some point in Norse mythology, the Ӕsir have had enough of Loki’s shit.

In the Edda, Loki causes the death of Odin’s favorite son, Baldr. In the Lokasenna, he just insults absolutely everyone.

In both versions, the Ӕsir capture Loki under the earth. There they transform his son Vali into a wolf, and the wolf rips his brother Nari to shreds. The  Ӕsir take the entrails of Loki’s son Nari and use them to bind Loki to a rock.

But that’s not enough. They also put a venomous snake above Loki, dripping poison into his face. Loki’s wife Sigyn catches the poison in a bowl, but when the bowl is full she has to empty it.

When Sigyn empties the bowl, the snake’s venom drips onto Loki’s face. He thrashes against his binds – and that’s what causes earthquakes.

Do yourself a favor and check out the original source – this is a great translation.

You can also check out the connection between Loki & Saturday.

And hey, I wrote a novel with the Norse god Loki – click here to check it out.

Or find out what Norse gods have to do with Monday, Tuesday, Wednesday, and Thursday.